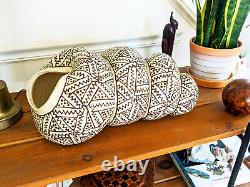 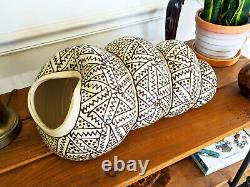 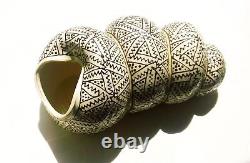 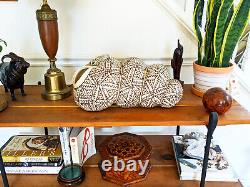 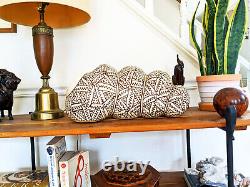 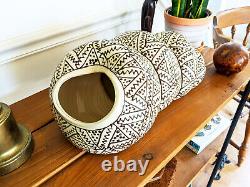 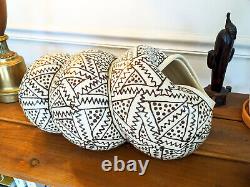 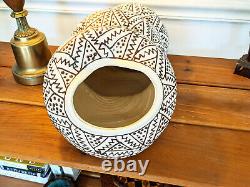 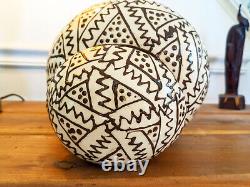 Rare vintage free form glazed ceramic shell handcrafted by renowned ceramicist and artist Roy Hamilton in the shape of a Biomorphic snail / cornucopia horn / sea shell, for a show held at Saks 5th Avenue in 1976. The beautiful creamy colors and patterns and striking shape would be perfect for indoor decor or simply for display. Signed Saks 5th Avenue on the bottom, the pottery shell is 18" long, 10" wide and 8 high. In excellent vintage condition with minimal signs of wear. The artist: ROY HAMILTON Roy Hamilton, artisan and designer, whose unique ceramics have been hailed by The New York Times, and featured frequently in Architectural Digest and House and Garden, was born and educated in England and graduated from the Textilfachschule in Zurich, Switzerland in 1956. After working as a designer for Sekers Silks and Jacqmar in England, he moved to New York to work for The Butterick Co. And later Liberty of London and Hoechst Fibers, the producers of Trevia. Hamilton's interest in ceramics began as a weekend hobby and developed into a full time occupation in 1974, holding his first one-man show at The Benson Gallery in Bridgehampton in 1975. He has since become a prominent source for leading decorators, architects and retailers across the country, including Parish Hadley and McMilan in New York, William Hodgins in Boston, Steve Chase, Intradesign and James Noprthcutt in California, as well as David Hicks and Designers Guild in Europe. His work (has been) installed in major hotels around the world, including The Remington in Houston, the Bel Aire and Century Plaza in Los Angeles, The Hilton Towers in Chicago, The Meridien and Four Seasons in Newport Beach, and hotels in Hong Kong, Shanghai and Melbourne, Australia amongst others. Hamilton's growing design influence had extended to commissions for a complete line of dinnerware for Tiffany & Co. Gourmet cookware for Hartstone and area rungs for Edward Fields. 1981 saw the introduction of Hamilton's collection of furnishings fabrics and wall coverings for Donghia Textiles, as well as a collection of stationary for T/A Designs, including an exclusive group for Saks Fifth Avenue. Collections of glass and barware for Dorthy Trope, dinnerware, linens and gift items for Mikasa and a collection of area rugs for Form 111have followed.

Hamilton worked since 1981 as home furnishings consultant to Marks and Spencer, Europe's largest and most famous retail group. He received a Resources Council'Roscoe' Design Award in 1982. His work has been displayed at major hotels, including the Four Seasons in Maui. In A NEW YORK TIMES article from 1988 he is hailed: In ceramics, the work of Roy Hamilton is certainly expressive of our time, with clean, imaginative shapes and interesting finishes.

All these objects reflect an appreciation and understanding of quality crafted objects. I think it's been a very luxurious time. The classic, quiet things will endure.

This item is in the category "Pottery & Glass\Decorative Pottery & Glassware\Vases". The seller is "adthaal" and is located in this country: US. This item can be shipped to United States, Canada.