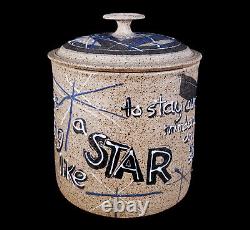 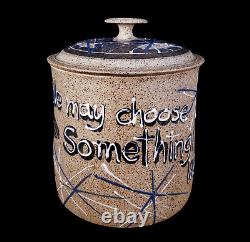 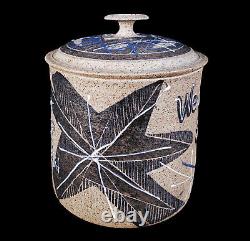 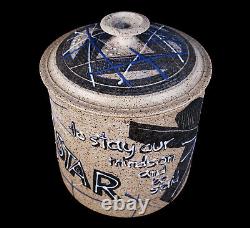 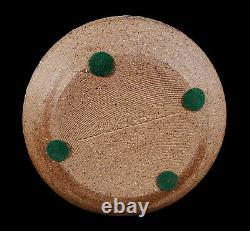 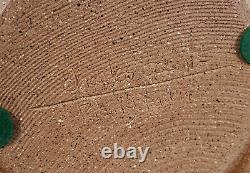 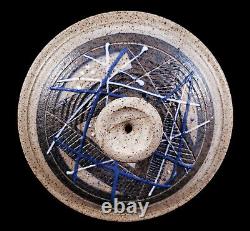 Charles Counts Rising Fawn Pottery Jar Description and Item Information Up for sale is this vintage studio art pottery jar by Charles Counts. Please excuse the glare in the photos. This multicolored pot is decorated with star patterns and an excerpt from Robert Frost's poem, Choose Something Like a Star.

I have owned other pieces by Charles Counts, but I have never seen another piece like this. It stands approximately 8 7/8 inches tall; it has a maximum width of about 7 inches.

Unpacked, it weighs 4 pounds 5.2 ounces. There are green felt pads beneath. This would be an interesting addition to a collection of vintage American studio ceramics. It is marked beneath, as shown.

Counts is a well-known potter, with a listing in the Vasefinder online museum and a page on Wikipedia. Per Vasefinder, he was born in Kentucky.

His first experience making pots occurred while he was studying at Berea College. He was mentored by Lee Cornelison of Bybee Pottery. Counts studied at the graduate level at Southern Illinois University and at the University of Southern California.

He also studied at Pond Farm under Marguerite Wildenhain. During the late 1950s, Counts founded his first studio at Beaver Ridge, Tennessee. He also had a studio at Rising Fawn. He published books on pottery and philosophy.

Counts exhibited at the Nationals during 1964 and 1966. He contracted malaria while visiting Nigeria, and it was there that he passed away. Condition The jar displays well overall, despite not being in perfect condition. Part of the lid has been broken and neatly glued, as found (please see Photo 7). To the lower part of the jar (the curved area in between the decorated sides and the base), there is a hairline / firing fissure which goes almost all the way around (please see Photo 5).

I can not see this on the interior, and I believe that it does not go through to the inside. It is probably a firing flaw, as made. There are no other chips or cracks. Payments must be received within three days of the end of the listing, unless prior arrangements have been made. And international government regulations prohibit such behavior. Other Information Individual computers may display colors differently.

The item "VINTAGE CHARLES COUNTS MID-CENTURY MODERN RISING FAWN STUDIO POTTERY JAR With POEM" is in sale since Friday, March 26, 2021. This item is in the category "Pottery & Glass\Pottery & China\Art Pottery\Studio/ Handcrafted Pottery". The seller is "craigkc" and is located in Sunny California.