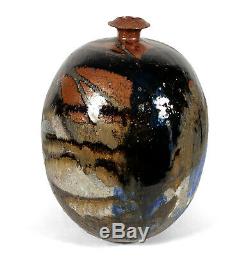 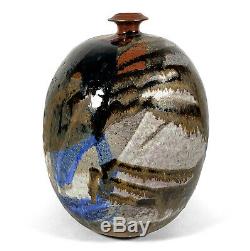 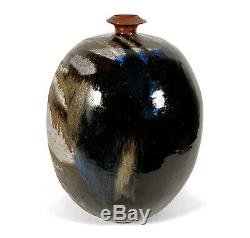 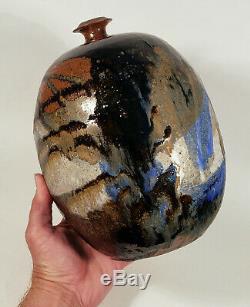 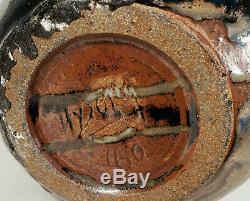 Vintage Joseph Hysong Studio Pottery Vase Description and Item Information Up for sale is this studio art pottery vase by the listed California artist, Joseph Hysong. Please excuse the glare in the photos. This weed pot or moon vase has abstract decoration with multicolored glazes.

It has a very narrow opening with a flared lip; the body has a swollen form. It stands approximately 9 3/4 inches tall; it has a maximum width of about 6 1/2 inches. Unpacked, it weighs 5 pounds 14.0 ounces. This would be a fine addition to a collection of vintage American studio ceramics. It is marked beneath, as shown.

The following biographical information is from Hysong's obituary in the Monterey Herald. Hysong was born in 1925 in Derry, Pennsylvania. He served in the United States Navy during World War II and the Korean War. Upon leaving the service, he attended San Jose State College where he earned a Bachelor of Arts in business administration and a Master of Arts in ceramics and sculpture.

Later in life, he remarked, I was majoring in business and took ceramics for an easy credit, but once I put these hands in clay I couldn't take them out. Hysong established and taught a two year transfer program in ceramics. He also chaired the Art Department and the Creative Arts Division. Hysong had a long and productive teaching and artistic career; he served as mentor and friend to numerous students.

He was an accomplished potter and artist who won many awards for his outstanding work. Hysong exhibited both locally and nationally alongside many of the great artists of the American studio pottery movement. Per Vasefinder, Hysong participated in the Syracuse Nationals in 1956, 1960, 1962, 1964, and 1966. Per the Everson Museum of Art, he was awarded the Pemco-Glidden prize at the 1962 Nationals for a bottle form vase with exceptional glazes.

That vase is part of the Everson's permanent collection. Hysong was a versatile ceramicist.

Many of his functional pots were either glaze-painted or sgraffito-decorated. Others displayed subtle Asian-inspired glazes as their only decoration.

He was a master of ash glazes. His production ranged from delicate bowls and pitchers to powerful vase forms reminiscent of the work of the late Toshiko Takaezu.

Hysong was a permanent resident of the Monterey Peninsula (Carmel) for over 45 years. Aside from art and ceramics, he enjoyed gardening and growing bonsais, orchids, gourds, exotic plants and vegetables.

Hysong passed away in 2008. Condition This vase looks very good overall, with light wear. There are no chips or cracks. The top has minor asymmetry, as made. Excess glaze was ground from beneath when this was made; variations in glazing and dimples/bubble pops in the glaze are also as made.

Payments must be received within three days of the end of the listing, unless prior arrangements have been made. And international government regulations prohibit such behavior. Other Information Individual computers may display colors differently.

The item "VINTAGE 1960 JOSEPH HYSONG STUDIO ART POTTERY VASE MID-CENTURY MODERN CALIFORNIA" is in sale since Tuesday, April 28, 2020. This item is in the category "Pottery & Glass\Pottery & China\Art Pottery\Studio/ Handcrafted Pottery". The seller is "craigkc" and is located in Sunny California.