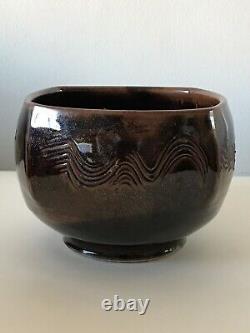 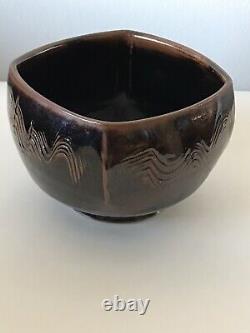 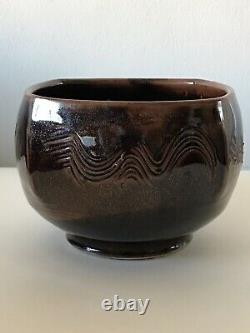 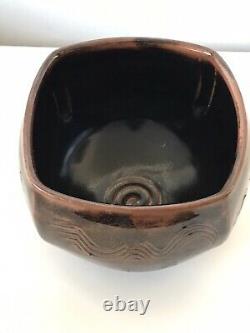 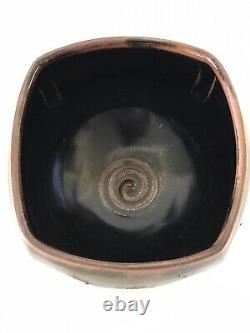 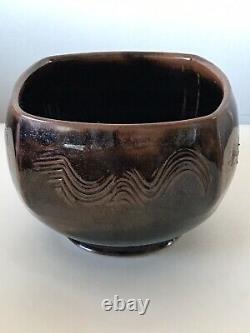 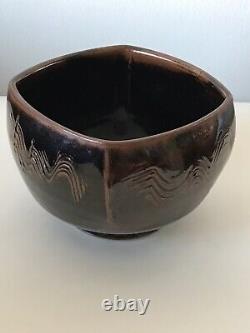 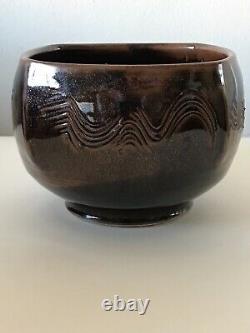 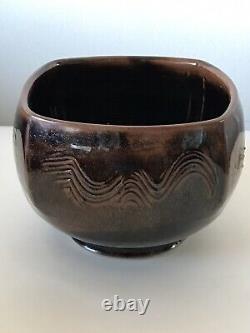 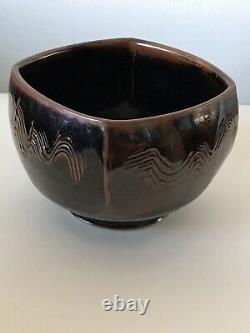 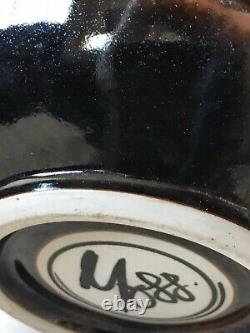 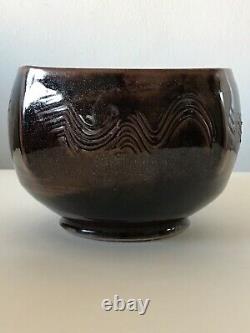 GORGEOUS NEIL MOSS MODERN CALIFORNIA STUDIO POTTERY BOWL. DIMENSIONS: 8W x 8D x 5.5H. As well as working in his own studio, Moss taught ceramics in California. He developed a strong ceramic program at El Camino College in Torrance. Although El Camino is a small school with a small ceramics department Neil ran a rigorous program and many of his former students went on to careers in ceramics, as studio artists and as teachers themselves. He provided a remarkable example of what can be accomplished with talent, determination and enthusiasm. His work was recognized by the Pasadena Art Museum in California Design Ten. Moss work has grace the homes of private collectors through the U. Various pots, vases and baskets hang on the wall on clear pedestals in the brightly lit Art Gallery. This was more than just an art show; it was an ode to Neil Moss, a ceramics professor who died due to a brain aneurysm earlier this year. Eighteen artists, including Moss, have worked on displaying The Wheel Keeps Turning, an art exhibit at the Art Gallery until Nov. The other 17 artists were either former students or colleagues who were influenced by Moss.

The Wheel Keeps Turning came from Russell McMillin, associate art professor, who was thinking about the wheel that turns during the process of pottery making but also the wheel of life that keeps turning although someone died. He just loved teaching and he loved claying, Hal Frenzel, long-time friend and former student of Moss, said about the former professor. It was his heart and it was his life. He was a dedicated teacher and a dedicated potter.

He loved clay and his life was surrounded by clay. It was a part of who he was. Moss work of pottery was simple and earthy, yet elegant. His work reflected who he was after all the years of rigorously working. His ash-glazed baskets with curved handles, rusty garden pots, vases with bamboo joints, elegantly-decorated platters, tea bowls and abstract sculptural forms are elegant, elemental, and poetic, Moss daughter Nikki said. I just love his lids.

His lids are so fascinating because they are so nonchalant, Evan Sisson, former assistant of Moss and current ceramic lab technician said. At that top edge of the lid, you can almost see his finger pushing the clay down and never going back and touching it again. Moss was one of the hardest working professors and a kind man who also was respected by many Juan Carlos Ornelas, former student of Moss said. Moss might have been happier to see all these people, Keiko Tamura, art major and former student of Moss, said.

Even though he passed away, it feels like his soul is still here. The item "NEIL MOSS MODERN CALIFORNIA STUDIO POTTERY 1970 VINTAGE CERAMIC CRESSEY NATZLER" is in sale since Wednesday, December 2, 2020. This item is in the category "Pottery & Glass\Pottery & China\Art Pottery\California Pottery". The seller is "vintagerotty" and is located in Pasadena, California.