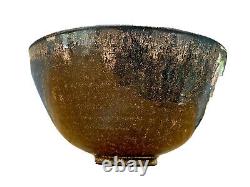 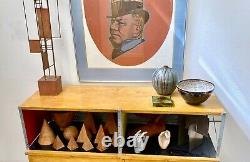 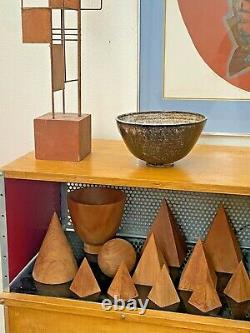 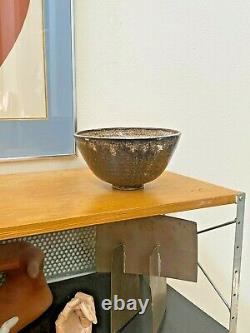 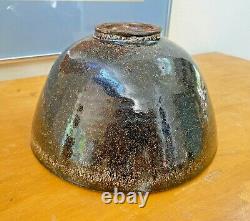 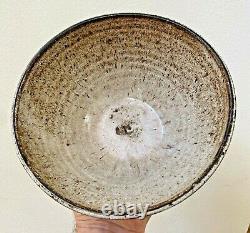 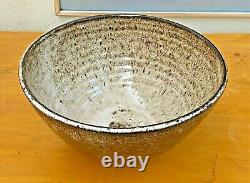 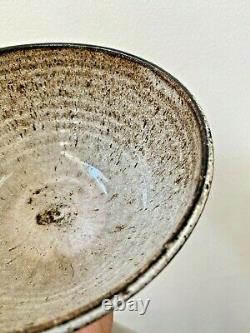 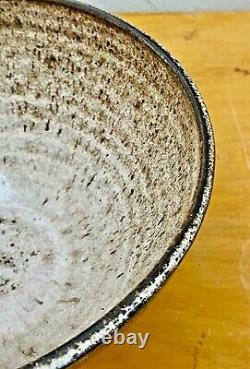 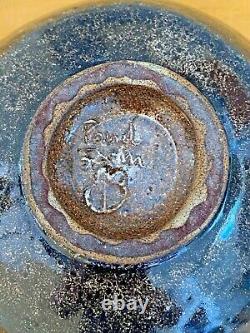 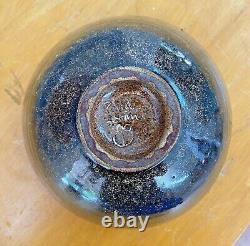 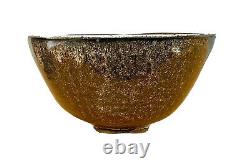 Marguerite Wildenhain Pond Farm Studio Pottery Bowl. Dimensions - 8.5" diameter x 4.5" tall. There are no cracks, chips or repairs. Hand signed on the bottom Pond Farm with Marguerite Wildenhain mark. Marguerite Wildenhain (October 11, 1896 - February 24, 1985), born Marguerite Friedlaender, was a French-born American ceramic artist, educator and author. In the second half of her life, having emigrated to the U. In 1940, she conducted summer workshops at Pond Farm, her remote mountain top home and studio near Guerneville, California (in the Russian River area), and wrote three influential books. Wildenhain was born in Lyon, France, to upper middle-class parents (a German father and an English mother) who were silk merchants. When still in her teens, her family moved to Germany, where she completed secondary school.

Beginning in 1914, she studied sculpture at the Hochschule fur Angewandte Kunst in Berlin, then worked as a decorator of porcelain ware at a factory in Rudolfstadt. Shortly after World War I, while in Weimar for a weekend, she saw unexpectedly the posted proclamation by architect Walter Gropius about the founding of the Bauhaus school in 1919. Then and there, as she recalled in her autobiography, she decided that she would enroll. Wildenhain studied at the Weimar Bauhaus for about five years, in the process of which she worked closely with sculptor Gerhard Marcks (her Formmeister or Form Master) and potter Max Krehan (her Lehrmeister or Crafts Master).

In 1926, she left the school with the designation of Master Potter, and moved to Halle, where she was appointed head of the ceramics workshop at the Burg Giebichenstein. While there, she also became associated with Konigliche Porzellan-Manufaktur (or KPM), now Staatliche Porzellan-Manufaktur, for which she designed the prototypes for elegant, mass-produced dinnerware, most notably the Halle tea set and the Burg-Giebichenstein dinner service (both in 1930). At about the same time, she married a younger ceramic artist named Franz Wildenhain (1905-80), who had earlier been her classmate at the Weimar Bauhaus. When the National Socialists came to power in 1933, Wildenhain was forced to leave her teaching post because of her Jewish ancestry.

With her husband (a non-Jewish German citizen), she moved to Putte, Holland, where the couple established a pottery shop called Het Kruikje (Little Jug), and where, until 1940, they lived by making pottery. In advance of the Nazi invasion, Wildenhain was able to leave Holland in 1940 and to emigrate to the U. But her husband's concurrent request was denied. Arriving in New York, Wildenhain traveled slowly east to west across the U.

Soon after her arrival, she held brief positions at the Oakland School of Arts and Crafts, the Appalachian Institute of Arts and Crafts, and Black Mountain College. In the early 1940s, she settled permanently at Pond Farm, an artists' colony founded by architect Gordon Herr and his wife Jane Herr, about seventy-five miles north of San Francisco. Citizenship in 1945, Wildenhain was able to fund and to sponsor the emigration of her husband (who, in the years of their separation, had been drafted into the German army).

Marguerite and Franz Wildenhain, and two other artist colleagues, textile artist Trude Guermonprez (born Jalowetz) and metals artist Victor Ries became the faculty at the first summer school at Pond Farm, circa the late 1940s. It soon became evident, however, that the four artists were incompatible, and that the Wildenhains' marriage was falling apart. For these and other reasons, the artists' colony abruptly ended.

Soon after, in 1950, Franz Wildenhain joined the faculty at the Rochester Institute of Technology in New York, while Marguerite continued to live at Pond Farm. In the years that followed, as Marguerite Wildenhain's artistic stature grew, she continued to operate her own summer school, accepting twenty or more students each year. She also published three books. Pottery: Form and Expression; The Invisible Core: A Potter's Life and Thoughts.

That We Look and See: An Admirer Looks at the Indians. , lectured at schools throughout the U.

And took solo expeditions to South and Central America, Europe, and the Middle East. Since her death at age 88, the grounds and buildings at Pond Farm have been preserved, and are now officially a part of the California State Parks system.

In 2007, scores of Wildenhain's students (along with international scholars) contributed essay-length memoirs, photographs and other materials, to the compilation of a large-format 776-page book (with 837 illustrations) about her life, her teaching, and her influence on the subsequent growth of ceramic arts and crafts. Marguerite Wildenhain and the Bauhaus: An Eyewitness Anthology. The book was co-edited by (her former student) Dean Schwarz and Geraldine Schwarz.

The seller is "parlaydesign" and is located in Denton, Texas. This item can be shipped to United States.