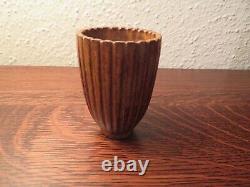 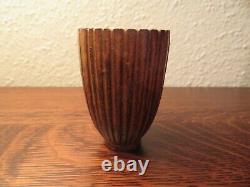 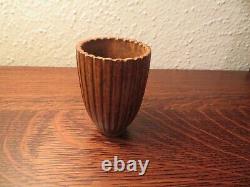 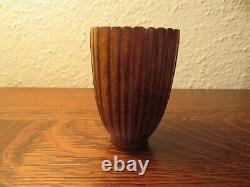 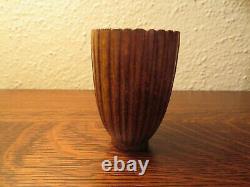 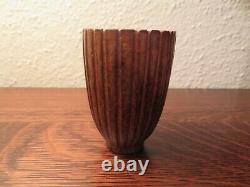 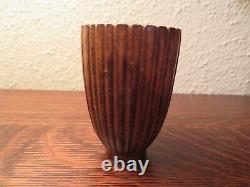 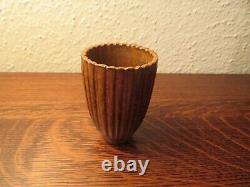 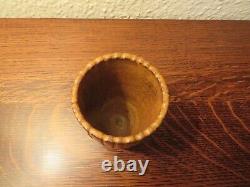 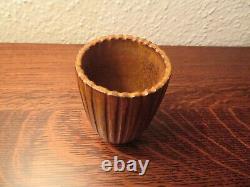 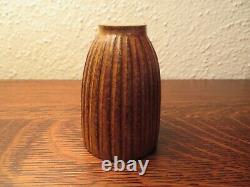 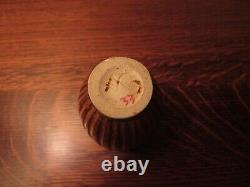 Iconic Danish Design: Arne Bang, Own Studio, Machine Age MCM Vase, Rare Glaze. Arne Bang (1901-83) is one of the most important figures in 20.

The first important artistic influence in Arne Bang's life must have been his parents. Arne Bang was one of three children of the painter Hans Peter Carl Christian Bang. After the early influence of his father, Arne Bang's artistic talent was then shaped by his teachers. As an apprentice to Niels Hansen in 1917-19, Arne began to develop his skills as a sculptor, which defined his subsequent work in all media, including stoneware. After spending five years at the Academy (1920-25), Arne Bang left to undertake other artistic endeavors before returning to complete his studies under Utzon-Frank in 1928-29.

His final project was the sculpture "A Fallen Warrior", for which he later received a rare gold medal in 1932, which remains one of the works for which Arne Bang is best known in Denmark. In addition to his studies at the Academy and two trips to Paris (1923 and 1925), Arne Bang also sought out other experiences in the 1920s to begin to apply his training as a sculptor to the ceramic arts. Ng a joint workshop in Fredricksberg known as Copenhagen Stentøjsbrænderi (KSB).

In 1928, Jacob Bang accepted a permanent position at Holmegaard Glassworks, where he was to remain as Artistic Director until 1941. Upon completion of his studies at the Royal Academy in 1929, Arne Bang was invited to join Holmegaard to begin a stoneware line, and a kiln was constructed for him in the glassworks. Bang initially took up residence in factory housing and was to spend the rest of his life in Fensmark, to which he developed a deep attachment, leaving behind his youth in Fredriksberg. Once established at Holmegaard, Arne Bang quickly began to design and produce stoneware in the style for which he remains so well known today. During the first half of the 1930s, his work drew increasing critical acclaim and commercial success for Holmegaard.

Beginning around 1938, Arne Bang began to more clearly establish himself as an independent stoneware artist, gradually separating himself from Holmegaard Glassworks, and already producing under his own signature. This is reflected in the announcement for his exhibition that year which, unlike previous years, featured his name without reference to Holmegaard. In 1941, Jacob Bang left Holmegaard and moved to Copenhagen, and by 1943 he had become Artistic Director at. Nymølle ceramics factory in Lyngby. Upon his brother's departure from Fensmark, Arne Bang moved his family to the house that Jacob Bang had built next to the rectory.

In multiple ways, the year 1937 marked one of the high points of Arne Bang's career. N his exhibition that year, the ribbed stoneware which is instantly recognizable as Arne Bang's work emerged as an evolution of his earlier, more organic style. By 1948, Arne Bang had completely separated his production as a business from Holmegaard Glassworks, although he continue to work on factory premises until 1953, when he built his own workshop. At Christian Winthersvej in Fensmark. Over the course of the 1930s, the signature on Arne Bang's stoneware evolved from the stylized "HG" for Holmegaard GlassWorks to the stylized "AB" which appears on most of his stoneware output. While most works bear the painted version of his signature, more unique, studio pieces are said to bear an incised version. This piece is part of a line of ribbed, machine age stoneware and is model 33, which is hard to find. This piece is very well marked with Arne Bang's hand-incised stylize "AB" monogram, along with a hand-painted red model number. What really distinguishes this piece is its.

Matte orange or rust brown glaze that beautifully coats the entire piece inside and out. This flaring cup form vase is a little more than 3.25 inches high and 2.25 inches wide across the mouth, flaring from a narrow base that is 1.25 inches wide. It is in excellent original condition, with only a few very small glaze pops from the firing that are quite common in Arne Bang stoneware.

Please see photos for more details on both condition and glaze. This glaze is rarely found on the market, but I will also be listing a second Arne Bang piece with the same glaze in a different model in the same line of ribbed, machine age stoneware. The bulk of my collection is Danish stoneware from the 1920s into the 1970s. The bulk of my Danish collection consists of Arne Bang, Saxbo, Jais Nielsen, Nils Thorsson, Erik Hjorth, and Ejvind Nielsen. I have done extensive research on these and other artists and workshops and would be happy to share that with interested buyers.

I also have substantial collections of American, French, Belgian and other 20th century northern European art pottery. Over the coming months I will be listing a wide range of pieces from my collection. Please check out my other listings and add me to your list of saved sellers to receive notification of new. This item is in the category "Pottery & Glass\Decorative Pottery & Glassware\Vases". The seller is "potsandplates" and is located in this country: US.